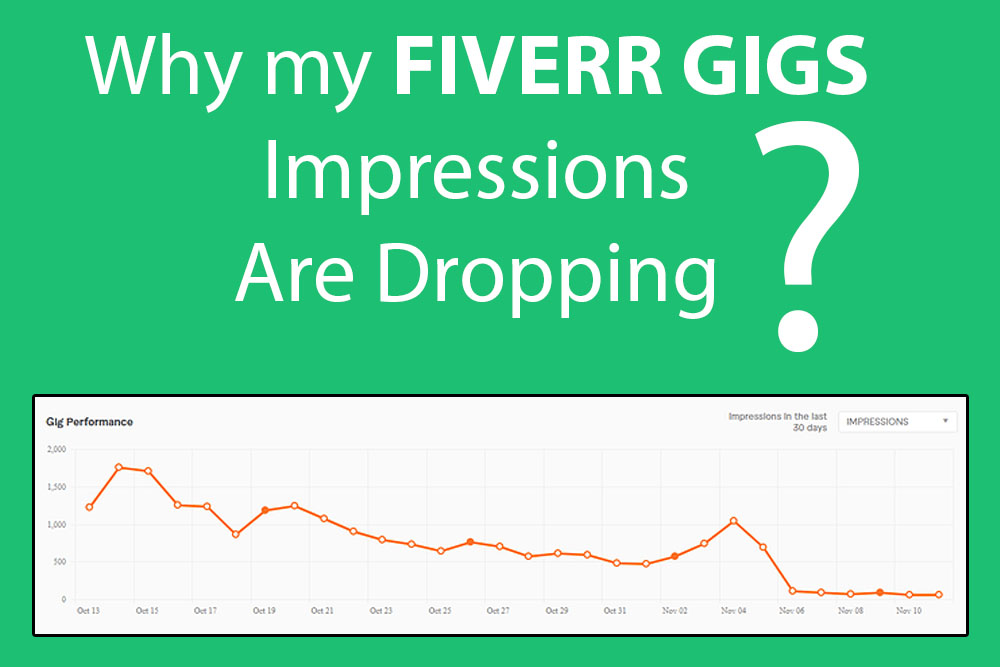 Why my Fiverr gig impressions dropping?

There comes a time in every Fiverr career when you think, “why my Fiverr gig impressions are dropping?”. Fiverr earning is not a stable source of monthly income. You can make very well for one month and for the next month you might not get a single order. This is how the Fiverr algorithm works. But it’s not only dependent on a Fiverr algorithm. You might have made some mistakes with your profile that might lead to dropping in gigs impression. Let us explore the answer to your question, “why my Fiverr gig impressions are dropping?”.

If you have canceled any order recently, then you might experience a drop in gigs impressions. Fiverr states that any cancellation of an order will reduce your gig’s visibility on the Fiverr page. Your gig position will drop, and gig impressions will drop drastically. Always try to communicate with the Buyer to avoid cancellation of the order. You can offer some perks or upsell services, so they don’t cancel the order. Order can be canceled by

An issue with Gig Images

When you created your Fiverr profile and gigs, your gig image might be best on the platform. But don’t forget that thousands of gigs are added to Fiverr every day. Some of these new gigs might have Gig images that are eye-catching and better than yours. It might result in a drop in your gig impressions. You must change gig images often and create the best gig images to get more and more clicks and impressions.

Your response time to client’s messages can also result in Fiverr gig impression dropping. You should try to be responsive and try to reply within one hour. If you respond late, then obviously, Fiverr knows that there are better sellers on their platform than you. Fiverr doesn’t want to repulse buyers from their platform, so they want you to reply to messages as soon as possible. Otherwise, buyers might look for another freelancer platform for hirings, such as Upwork and Peopleperhour.

I hope now you understand “why my Fiverr gig impressions are dropping?”. You should also read top Fiverr mistakes you shouldn’t make.

Published in Tips & Tricks and Worth Reading